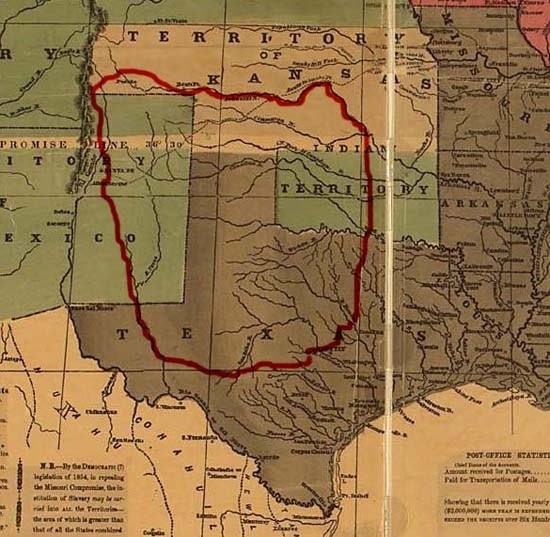 I don’t do current events or even read the newspapers much these days. Been there done that, as the T-shirt says (although I can’t remember I ever got a T-shirt as a member of the Fourth Estate). Occasionally I surf across something that gets my attention if not my goat, but I try to let my thoughts simmer for a bit rather than fly off the handle. One that I do feel compelled to respond to is this NYT piece. I’m no Texan, so I’ll pass over the outrageous twisting of history needed to characterize the Texas War of Independence as a “slaveholder rebellion.” And I’m not familiar enough with California history to question the “Afro-Mexican” roots of Los Angeles.

But as an adopted New Mexican of some years standing and a born American I do have to take issue with the essay’s underlying premise that, as the old joke goes, “Not only did you steal half our country, señor, you stole the half with all the paved roads!”

First, I have to say tracing Mexico’s national boundaries using 1839 maps is as fanciful an exercise as tracing the geography of Middle Earth based on one of Tolkien’s maps. The maps of the period were hopelessly inaccurate, as I’ve noted in a previous post. The distortions of the Disturnell map used by Mexico and the U.S. in negotiating the Treaty of Guadalupe confused relations between the two countries for years.

More important, Mexico (and Spain before her) were never effectively in control of the territories those states claimed. Outside of the narrow corridor of tiny Hispanic settlements straggling up the Rio Grande and the Pueblos they had subjugated, the land belonged to los Indios Bravos.

I’m not sure of the provenance of the above map, but I believe it accurately portrays the boundaries of Comancheria until well into the 1870s. This map shows the homeland of the Chiricahua. I don’t have another that would show the Western Apache, the Papago (Tohono O’Odham) and the other tribes to the west; suffice to say they were no more under the Mexican government’s control than they had been under the heavy thumb of Spain.

In fact, the Mexican frontier was in retreat leading up to the Mexican-American War. The Comanche to the east and the Apache to the west were lords of the Southwest. It took the Americans another 40 years (and more blood than was shed in the war with Mexico) to make good their claim to the land.