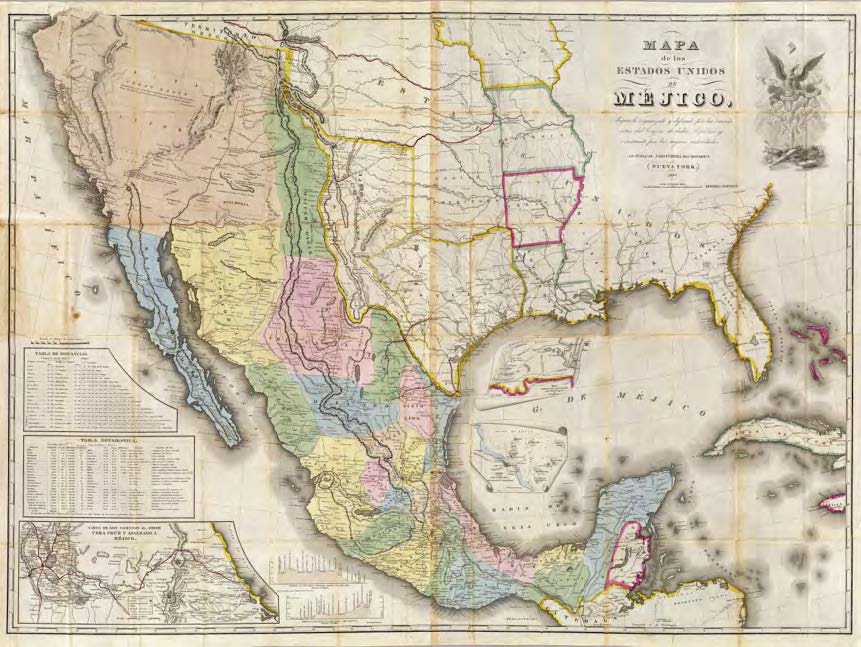 I spent St. Patrick’s Day at the Albuquerque Anitiquarian Books & Maps Fair (highly recommended; I believe it’s the third weekend of every March). Some beautiful maps I would love to own if I had the $ and the space to display them. But I contented myself with just one: a nice copy of Disturnell’s Treaty Map. From Dumont Maps & Books in Santa Fe, it comes with an informative 20-page pamphlet on its provenance.

Disturnell’s 1847 map of Mexico was used in drawing the new international boundary agreed to by the parties to the Treaty of Guadalupe Hidalgo in 1848, and it’s hard to think of another map in American history that caused so much confusion and controversy, leaving a legacy of misunderstanding and ill will that lingers today.

Looking at it, it’s hard to believe this was the most reliable representation the Americans had of the vast territory they had just seized from their southern neighbor. (The Mexicans may have had a better map of their northern domains but chose to base the Treaty negotiations on the Disturnell version because its inaccuracies furthered their own goals.) The controversy over where the real border line lay on the ground continued for five years and was only finally settled by the Gadsden Purchase in 1853.

People new to the history of the Southwest are sometimes surprised to discover that the scar tissue left by that contentious settlement still itches. In a recent emotional (and virulently anti-Trump) NYT op-ed, historian Enrique Krauze argues that the Mexican government has a solid case for nullifying Guadalupe Hidalgo before the International Court of Justice.

Kiser’s Turmoil on the Rio Grande explores the issues as part of the history of the Mesilla Valley in southern New Mexico, and I’ve just picked up Griswold de Castillo’s Treaty of Guadalupe Hidalgo to dig deeper into the subject.

One Reply to “Disturnell’s Map”