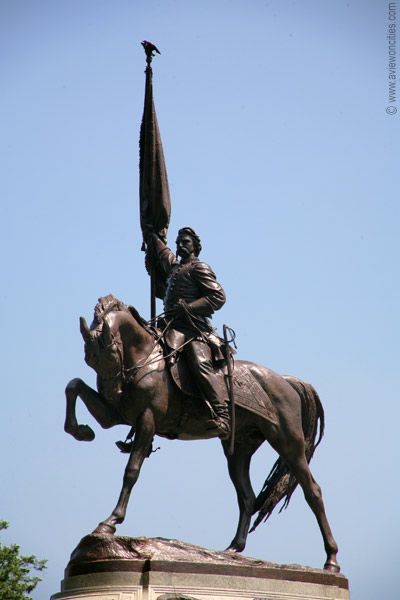 I rose to the defense of Black Jack Logan in an earlier post, but today it’s appropriate to revisit the General John Logan Memorial with an emphasis on the “Memorial” rather than the man whose name it bears. Logan flourishes his country’s flag astride a horse in Chicago’s Grant Park not for his military qualities (he was abler than most of the Union’s generals, but that’s faint praise). His most significant and lasting achievement came in 1868 when as Commander In Chief of the Grand Army of the Republic he declared May 30 to be “Memorial Day” and called on his fellow veterans to make it a national day of remembrance for their 365,000 comrades who gave their lives to preserve the Union.

They also not coincidentally ended slavery in the “Land of the Free.” Those today who have forgotten the sacrifice that entailed would do well to revisit Lincoln’s Second Inaugural: “Fondly do we hope, fervently do we pray, that this mighty scourge of war may speedily pass away. Yet, if God wills that it continue until all the wealth piled by the bondsman’s two hundred and fifty years of unrequited toil shall be sunk, and until every drop of blood drawn with the lash shall be paid by another drawn with the sword, as was said three thousand years ago, so still it must be said ‘the judgments of the Lord are true and righteous altogether.'”